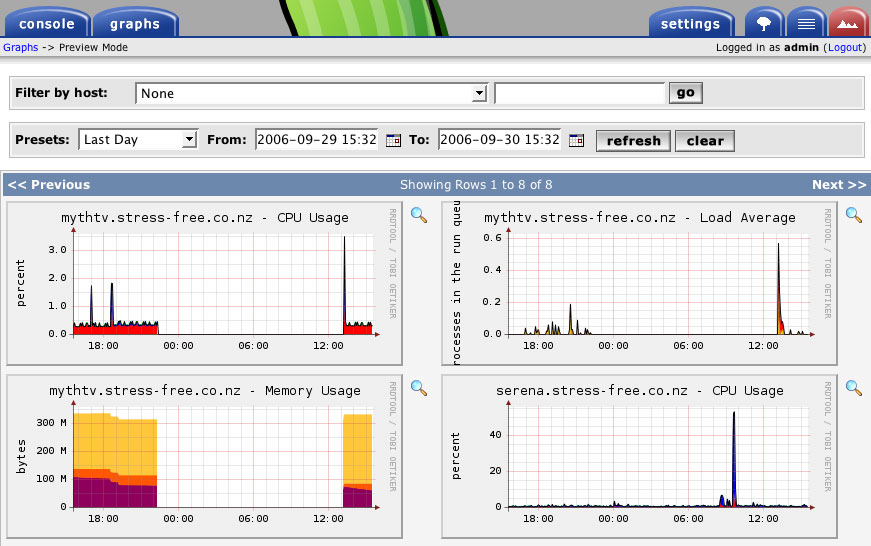 CactiEZ is a self installing Linux Distribution based off CentOS that sets up and configures a customized Cacti install. Everything is designed to be completely automated and working directly out of the box. This compact distro is loaded with extra features such as Syslog and Netflow data collection, Weathermaps, Reports, Auto Discovery, Router Config backup, Nagios, and much more! Both 32 Bit and 64 Bit installations are possible from the same CD.

I Installed CactiEZ in VMware server which was quick and painless. I followed the tutorials for Netflow (only supports version 5 as of now) then I had pretty ugly looking data, but i could at least see the IPs that were generating the most traffic to my web server and the “hackers” trying to log into my box over SSH with their kiddie scripts using root as the username over and over again, ha. After enabling SNMP on my servers and adding the servers to cacti, importing some windows templates, then setting up some graphs, I was able to see stats on IIS traffic compared to normal traffic leaving the NIC.

Cacti isn’t as intuitive as I would like it to be, but after some playing around with it, I kinda figured it out. On the bright side it is free!