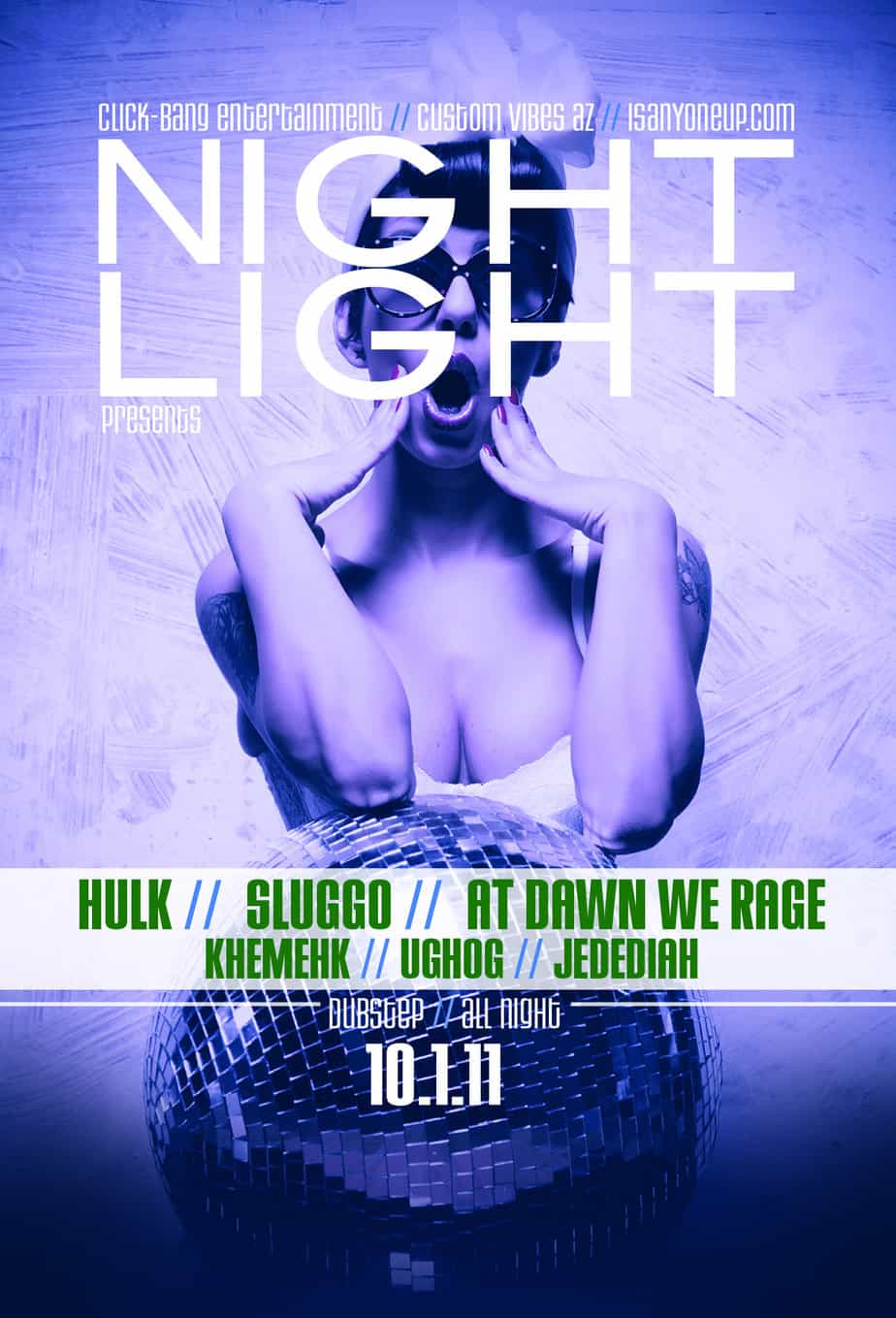 Arizona’s dirtiest night just got dirtier. Isanyoneup.com is teaming up with Click-Bang Enterainment and Custom Vibes AZ to bring you an ultra bass-heavy, ALL DUBSTEP LINEUP! Featuring some of the hottest local, regional, and national dubstep artists such as Jedediah, Ughog, Khemehk, At Dawn We Rage, Sluggo and Hulk, this party is set to shake Club Red to its foundation. Expect this night to get filthy and for all the action to get captured then posted on the raunchiest website isanyoneup.com. PheosiA Films will be there is make sure not one second gets missed. So come get nasty with some of the most bassed out music in town and hope your dad doesn’t find the pictures on the internet.

$15 at the door
Presales coming soon.

Hulk is a collaboration of Claw & Richie August, two creative minds that share a similar production style and enthusiasm for heavy bass driven music. After meeting at the 2009 Winter Music Conference in Miami, they began to send files back and forth to collaborate on projects in Dubstep, Hip Hop and Electro. Since the inception, Hulk has been catching the eyes and ears of artists such as Reid Speed, Reso, Mark Instinct, Ultrablack, TrillBass, High Rankin and DJ Lord of Public Enemy, among others

2010 saw Hulk’s first official release, dropping on Reid Speed’s Play Me Records as a Beatport Exclusive. Forthcoming releases on Foulplay, Shift, and Play Me Records are already creating a buzz around the duo. What’s more, the recent launch of their own record label, BroTown Records has the scene begging for the slated releases to drop, featuring tunes by Vaski, Druley, Mark Instinct, Symbl, as well as tunes by Claw, Richie August, and Hulk themselves.

Whether in the studio or on the stage, get ready for the biggest bass in the game, as Hulk is here to SMASH!

Sluggo is Bass fiend Nick Suddarth has been playing electronic bass music for well over a decade, but it’s been in only the past few years that his production skills have shot him to the top of the US dubstep scene as the producer known as Sluggo. In only a short time, Sluggo’s carved out a unique place in the dubstep world as his signature dark and twisted sound incorporating elements from drum & bass, hip hop, hardcore, and metal have this producer murdering dancefloors across the world.

Formerly part of the duo Ultrablack, Sluggo stepped out on his own over the last year as a producer, remixer, and label boss. With releases on the genre’s most influential labels including Rottun, Play Me, Basshead, Subhuman, and Ultragore Recordings, he receives massive support from heavy hitters Downlink, Desielboy, 12th planet, Bassnectar, Ajapai and Reid Speed just to name a few. Sluggo also has been collaborating with a who’s who of the genre’s finest, and has moved firmly from one-to-watch status to outright player in the pantheon of dubstep.

It was only a matter of time until Sluggo teamed up with long time associate Lank to create Ultragore Recordings the world’s #1 home of tear-out dubstep. Having garnered the 2010 Best New Label Award from Syphonic Distribution, Ultragore has become a fan favorite as the home of heavy bass and most murderous breaks in the dubstep world. In 2011 be on the look out for a full on assault from Ultragore with releases in the hopper from some of the biggest names in bass including Hulk, Liquid Stranger, and Mark Instinct as well as hot underground acts Torqux, Helicopter Showdown, and many more!

With a slew of releases on seminal labels such as Play Me, Subhuman and Ultragore in the hopper, collaborations with Brosafari of Evol Intent, Liquid Stranger, and remixes ranging from screamo band I Wrestled A Bear Once to Drum and bass bad boys BLOKHEAD, Sluggo’s set to set 2011 on fire with his brutal brand of hardcore tear-out dubstep.