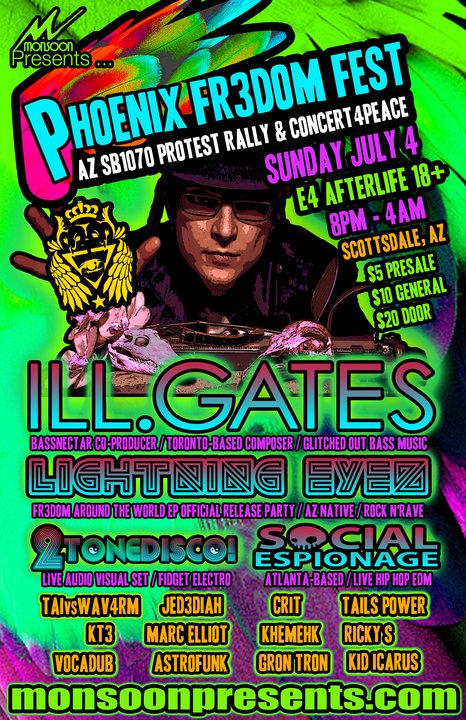 Monsoon Presents … our Debut Club Event from the Peeps who brought you NIGHT LIGHT
http://www.monsoonpresents.com/

Phoenix Fr3dom Fest is intended to be an annual event that brings people from all walks of life together to celebrate our freedom, not just as Americans but as humans.

The debut of Phoenix Fr3dom Fest will be held in protest of the fact that we the people did not get to vote on SB1070, and a rally for global awareness. Monsoon Presents is a green company in major suppor of sustainable resources such as hemp, and releasing our addiction to oil. AltoArizona.org has included the Fr3dom Fest in its 30 events in 30 days, and will be there to support.

“…speaker-shaking bass lines and big-time breakbeats that kept the crowd dancing through every element of his ever-evolving set… glitched out hip-hop, cut-up vocals, reggae twists and all the grime you’d ever need or want on a Saturday night in the city.” ~Duke LaRock, sinninginla.com

iLL.Gates is a Toronto-based composer, performer and educator. Over the past 15 years, he has established a global fanbase and a reputation as one of the most dynamic electronic music artists around. He regularly tours across North America, Europe, Australia and Asia. Gates has headlined at such festivals as Burning Man, Shambala, the World Electronic Music Festival and the New Orleans Jazz Festival. iLL.Gates has enjoyed a thriving creative partnership with Lorin Bassnectar, including a chart-topping remix of “Maximum” by DJ Vadim that sold so fast on Beatport, the duo were accused of chart-hacking.

His first full-length release, Autopirate (Muti Music, 2008), reached #1 on many esteemed charts; and continues to sell strongly. Many of his contemporaries cite Gates (aka The Phat Conductor) as a key artistic influence and inspiration in their music. While on tour, Gates frequently teaches workshops to grateful and attentive audiences, in which he shares his highly effective approach to producing quality finished music as well as insights into the mentality and strategies necessary to succeed in the music business.

Lightning EyeZ has been tearing up the local dance scene with his rock n’ rave style! He has recently completed his first EP and is ready to release his bassy madness to the world!